A hoax chain letter is being spread across Facebook, between users who believe that the social network is asking their opinion about whether it should implemention video adverts or not.

The hoax, which has been spreading for some time, has had something of a resurgence recently following widespread media reports that Facebook will introduce video adverts into users’ newsfeeds later this year. However, the chain letter contains a number of misconceptions, and sharing it will do nothing to change Facebook’s mind about introducing video ads.

Here’s what a typical version of the chain letter, which claims to come from Facebook CEO Mark Zuckerberg, looks like: 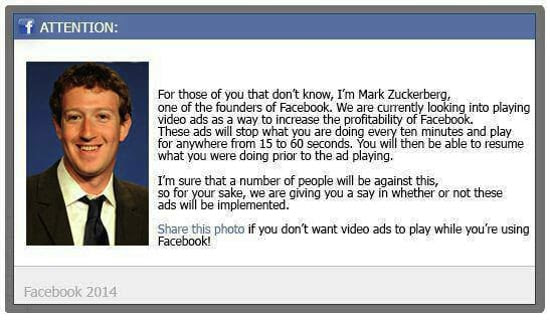 
For those of you that don't know, I'm Mark Zuckerberg, one of the founders of Facebook. We are currently looking into playing video ads as a way to increase the profitability of Facebook. These ads will stop what you are doing every ten minutes and play for anywhere from 15 to 60 seconds. You will then be able to resume what you were doing prior to the ad playing.
I'm sure that a number of people will be against this, so for your sake, we are giving you a say in whether or not these ads will be implemented.
Share this photo if you don't want video ads to play while you're using Facebook!

Although Facebook is looking into introducing video ads, there is no way that they will “stop what you are doing” or be displayed for up to 60 seconds every ten minutes. Think about it – if Facebook really prevented you from doing anything on the site for 10% of the time that you were logged in, it’s hardly likely to do them much good financially.

Furthermore, sharing a message is never going to be a way that Facebook will use to gauge its users’ opinion on a matter.

Finally, if there *really* was such a vote taking place – don’t you think you would find a mention of it on facebook’s blog or on Mark Zuckerberg’s own Facebook page?